Signs with a Hidden LOVE Story 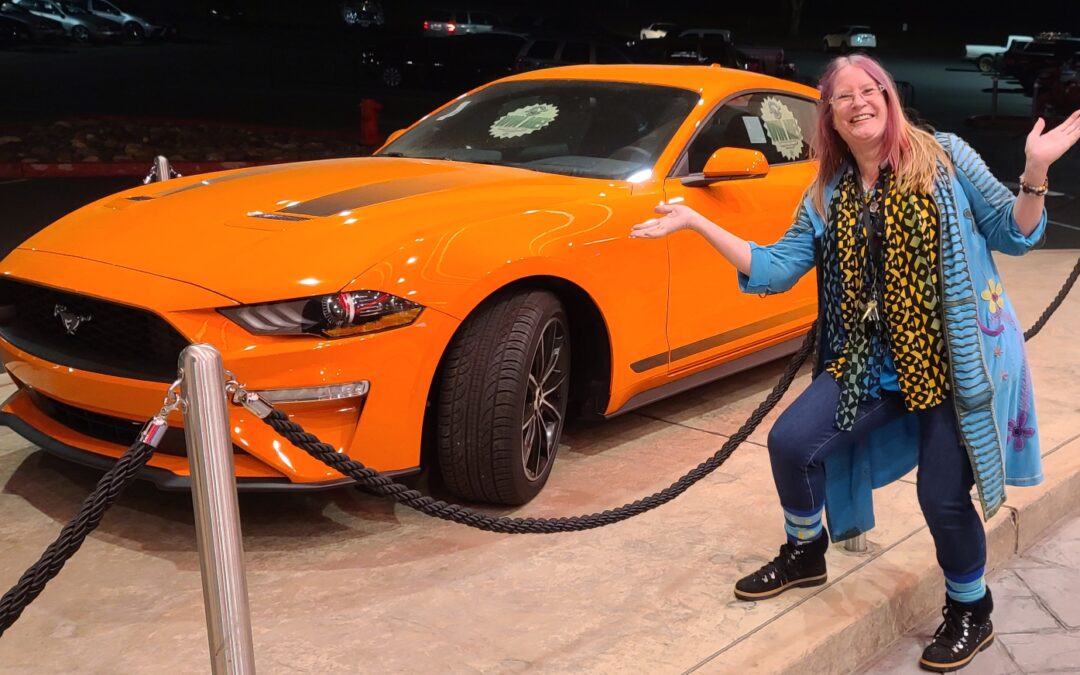 So as I mosey along, on this journey, just minding my own business, here are some interesting pieces, which show up along the way.

I had to take a drive up north 500 miles, for a very important appointment, for a few days. During this time I had rented a room to stay in.

Outside of the hotel room I was staying at, there was this Orange Mustang outside on display, to be won. Every time I walked out of the hotel room, it was as if it was waiting for me to get it in.

It was like someone had come to pick me up.

Oh YES this would be my fairy tale dream… and look at the universe trying it’s best to provide it to me…. Walla la la…

Talking to the security guard to why this car had sparked my interest and within 3 minutes of me telling my story, he said.. “You Will have your fairly tale dream come true…. This Orange Mustang definitely will be chasing after you.” umm, I didn’t realized I had told him that much of my story… Then he said, “I can Feel it, I know it’s going to happen. ” and that’s coming from a Guy… Say What❓

Now talk about my heart going pitter-patter… Definitely feeling like a young teenager girl deep down inside today, with all these Exciting feels, of a way.

That was 2 weeks ago.

A few days ago, I had to pickup a prescription, a 10 minute drive away from my house. Went inside, for 10 minutes and came back out. And what did I see?

You won’t believe this!

An ORANGE Mustang with a Black Race car stripe parked right next to my Black Santa Fe, with her Pink stripe. Now Really? How does the Universe do this?

Now if that’s not enough for myself to believe in this hidden story line, where my love story resides, 5 days later…. What do I see? You got it, another Orange Mustang, with a Black race car strip on it… This one pulled out, right in front of me… making sure I didn’t miss it. I mean like I could really miss the signs of an Orange Mustang now:+)

The only thing is, this one is a convertible, and the one which has sparked my interest in the first place, is not a convertible.

Gotta take another picture, to keep track of this fairy tale dream taking place right in front of my eyes.

Well I was done with my story, and ready to post it today… but the universe still had another sign to show me on the very same day.

Aa I pulled in to go shopping at Trader Joe’s , what the heck another Orange Mustang, right in front of me.

You probably all think there are lots of Orange Mustangs out here right?Well there are NOT. Meaning if I was to look for them, I’d never see one.

Or you probably think I’m stalking them, right? lol yeah right.. just every parking lot I pull into, there must be one…:+)

So do you think the universe is trying to tell me something?

So do you think the time is getting closer, to actually meeting up with the original Orange Mustang of interest?

Let me know. Leave you comments below.